P2P credit is needed to be able to increase temporarily the monetary mass with money there where it is needed. The money will arrive later (this is what solvency means) but the chain of transactions has not brought it there jet. However, the money is needed now to generate a new transaction demanded by the economy. Without this possibility of credit the economy gets stuck. The credit financial tool provides this flexibility.
An example is somebody waiting for a payment of an already made sale to a trusted customer.

P2P credit is not intended to be used to buy capital goods. For that purpose we propose not to use the general purpose currency like the sovereigns, but specific B2P type of currencies  with the B2P currency mortgages financial instrument.
A primitive P2P credit financial tool is to get the credit from a friend that has the money as savings. But this involves that the friend lending the money will not have his money available during the lending, and we are generating again a bottleneck in the economy if the friend loses an opportunity in the meanwhile.
The big financial innovation of the Fractional Reserve Banking is in essence that banks can create money out of the nothing, provided a good analysis of the solvency has been done, and the payback is very much granted by a proper solvency analysis.
The payback guarantees that the total monetary mass is returned to the equilibrium as required by the temperature of the overall economy, according the Quantity Theory of Money, which says that the volume of total money needs to follow the volume of the transactions and their velocity, if prices are to be stable (a kind of Ohms law for monetary circuits).
In the limit, in case of default, P2P credit system goes back to the old model of a friend lending money to a friend. In the P2P creditsystem the moneylender can still dispose of his own money during the credit time, meaning that if everything goes well, this is a more flexible solution than the old one. If things go wrong, and payback is not made, the moneylender puts the missing money as in good old times. 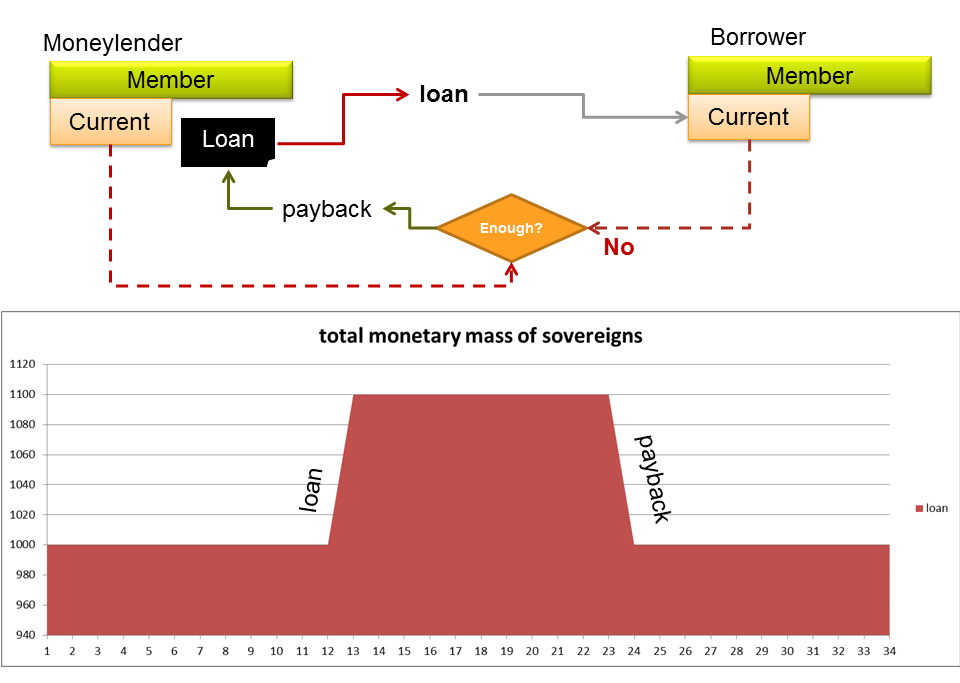 The P2P credit system democratises radically this faculty of doing Fractional Reserve Banking type of credits, now monopolized by the banks, and empowers every member with the same capacity to put money in circulation out of the nothing to a certain limit indicated by his reputation as money lender, that is, his reputation of lending money only to solvent borrowers. In this way we have the best added value of the Fractional Reserve Banking invention, but we get rid of all the disfunctions generated by the monopoly of the banks. The main disfunction is that Banks do not take into account the solvency any more, because their main purpose of credits has become to generate bubbles.
One of the main innovations would be that, when the Governing Bodies of the Equalitarian People's Association  have not enough with the collection of taxes for the Public Budget, the Governing Bodies can have sovereigns lend by the members and not by any bank.
The services of doing the solvency analysis prior to any credit are probably going to be paid to the moneylender as a fraction of the loan, and not as an interest added to the loan, again, to keep the monetary mass controlled, without any additional money needed to pay the interest. Probably some members specialize in making a business out of it and make an effort to gain more reputation, but they will not have any monopoly on it.

The People’s Bank generates the initial amount of sovereigns with a contract like this:
init {
this.store[this.origin()] = 1000.000.000}
If members need to put new money in circulation they cannot make a new contract like the above one, because it would be a different contract than the one generated by the People’s Bank. They would generate “sovereigns” out of the nothing, but the system would recognise it is different “sovereigns”.
Giving an order to the People’s Bank to increase the total amount in the original contract and to send this amount to the borrower is very complicated.
The easiest procedure is that the People’s Bank creates from the beginning an excess of sovereigns, a larger quantity as any foreseeable growth of the Equalitarian People’s Association will ever need, but keeps it out of circulation. Alternativelly, it may increase it more prudently at given periods. Of course, to do so, the People's Bank will need to go through a voting process and obtain a large quorum of all members.
LETs (Local exchange trading systems) have invented since long time how to do. Every new member is automatically “transferred” with a fixed amount of “credit” at his disposal. The weak part of the LETs system is that the procedure can only be used within associations with limited numbers of participants, where there is a social vigilance of the “solvency” of each participant at returning the credit by his contributions. To scale it up to millions we need to delegate and partly automatize this supervisory function, assigning the suervision of each credit to a "moneylender".
The P2P credit system we propose is strongly inspired by the LETs model. The People’s Bank will transfer to the loans accounts of each of the members of the Equalitarian Peoples Association a transfer of sovereigns as well.
The P2P credit system provides the old LETs system with tools to make it scalable to large populations by introducing some controls to this credit:

The loans account is not just another ethereum account of a member. It is an additional contract each member signs with the People’s Bank with the rules above.
It has an additional rule; money can only go out of the account provided a P2P Credit contract has been signed between the moneylender and the borrower, following a template.
In summary the loans account:
See also