B2P type of currencies as a promise of goods

B2C type of currencies are assumed to cope with most of the trade. B2C currency is essentially a bond currency issued by a for-profit or non-profit enterprise against its future production of goods.

These currencies are formally global (e.g. can be exchanged globally), although their value of use can be quite local. An example can be a B2C currency expressed as bonds for certain amounts of taxi services of the taxi association of a town. It has no value outside this town, but if somebody is planning to go there, anybody may buy it from any place in the world. There is no need to be member of any association.

The original proposer was E.C. Riegel , who proposed this type of money as early as in 1944.  He explains his theory in Private Enterprise Money , or in Flight from Inflation. Today, the main defenders of these type of currencies are:
The basic idea is that every company planning to put a good in the market, can finance his operations by paying to his providers with a currency issued by the company as a share in the future goods. Of course, it has to have the reputation for their providers to accept this currency. 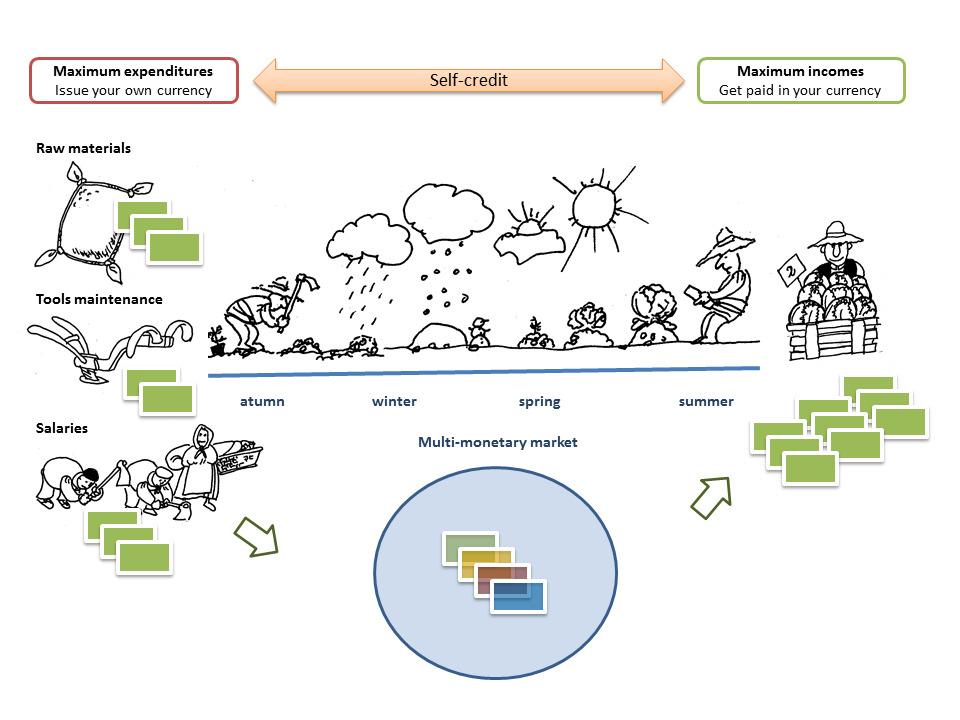 However, no ethereum smart contract will ever be so smart, - at least until the IoT provides each object with a label -, to know what goods the owner of one share of the currency can claim to the issuer, unless the goods are described in the contract in a way humans can read. When the holder of the B2C currency pays, only him, a human, can know and judge if he received the goods he was supposed to receive.

As it is a legal commitment, it would be preferable that all human-target clauses follow the same standard structure. It means that the smart contract should include an XML text, human readable through an XSL transform, containing the data of the promise of goods using the same XSD schema, so that all wallets display properly all B2P currencies, following for example the Ricardian contract schema or the INTERNET-DRAFT Ko Fujimura XML Voucher schema described at the Generic Voucher Language, so that a browser in the wallet can display an understandable message to the holder.

At this link a voucher.xsd schema can be obtained.

Of course, this information could be provided as linked data and hang from some URL, instead of inside the Smart Contract. In that case:
Publicado por Unknown en 7:17